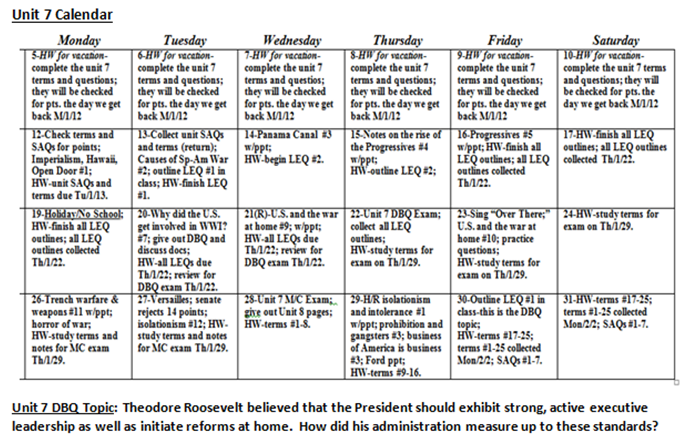 1) Theodore Roosevelt believed that the President should exhibit strong, active executive leadership as well as initiate reforms at home.  How did his administration measure up to these standards? (From the 1995 APUSH exam.)

2) Assess the influence of THREE of the following in the American decision to declare war on Germany in 1917. (From the 1995 APUSH exam.)

2) In an address to Congress, President Teddy Roosevelt quoted a West African proverb that said, “Speak softly and carry a big stick; you will go far.” Assess the validity of this statement regarding the foreign policy of President Theodore Roosevelt. (From the 2006 APUSH exam.)

“Worst of any, however, were the fertilizer men, and those who served in the cooking rooms. These people could not be shown to the visitor-for the odor of a fertilizer man would scare any ordinary visitor at a hundred yards, and as for other men, who worked in tank rooms full of steam, their peculiar trouble was they fell into the vats; and when they were fished out, there was never enough of them left to worth exhibiting-sometimes they would be overlooked for days, till all but the bones of them has gone out to the world as Durham’s Pure Leaf Lard!”

1) The above excerpt is most closely associated with which sector of the Progressive movement? (A) Muckrakers (B) Trust-busters (C) Wisconsin Idea (D) Square Deal

Comments from Mr. Diaz regarding his AP U.S. History class: Every student receives a calendar at the beginning of each unit that shows the schedule for the entire unit. Students are assigned 30-50 vocabulary terms to define for each unit.  Other homework assignments directly reflect the material that you will see on the actual AP U.S. History exam. Each unit has a multiple choice exam with from 35-50 questions that come directly from the vocabulary terms and an in class essay. The possible essay questions are given at the beginning of the unit. I give out sample multiple choice questions taken directly from the exams that we will take during each unit. I will never give a “pop” quiz or a Monday exam. Over the last 5 years the majority of my students received a “B” grade or better in my AP classes.