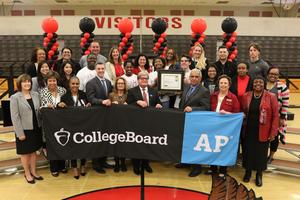 MORENO VALLEY, CA — Moreno Valley Unified School District has been named a College Board Advanced Placement® District of the Year for being the national leader among medium-sized school districts — defined as having between 8,000 and 49,999 students — in expanding access to Advanced Placement Program ® (AP®) courses while simultaneously improving AP Exam performance. The award was announced in front of Moreno Valley Unified School District students, teachers, district and school administrators, and College Board during an event at Valley View High School in Moreno Valley on March 12, 2019.

“I am incredibly proud of the students and educators from Moreno Valley Unified School District for being named the AP District of the Year because this recognition reflects the district’s commitment to preparing students for college and career success through challenging coursework. Thank you for providing this opportunity for students to push their academic limits and giving them this chance to go above and beyond what is expected from them,” said State Superintendent of Public Instruction, Tony Thurmond.

“This is a momentous recognition for our district,” said Board President Jesus Holguin, “We have continually worked to open up opportunities for all students, specifically access to AP courses. An honor of this stature is a point of pride for our district and the community of Moreno Valley.”

Moreno Valley Unified School District was one of 373 school districts across the U.S. and Canada that achieved placement on the annual AP District Honor Roll. From this list, three AP Districts of the Year — one for each category of district population size: small, medium, and large — were selected based on an analysis of three academic years of AP data.

Increasing access to AP course work while simultaneously increasing the percentage of students earning scores of 3 or higher is the ideal scenario for a district’s AP program, indicating that the district is successfully preparing a larger array of its students for the rigor of AP and college studies. Participating in AP course work can also lead to college savings for families because the typical student who scores a 3 or higher on two AP Exams has the potential to save, on average, $1,779 at a public four-year college and over $6,000 at a private institution.

“Among the more the 12,000 school districts in the United States, Moreno Valley Unified School District is one of three that especially stands out for their AP achievements last year,” said Trevor Packer, head of the College Board’s AP Program. “By achieving some of the highest gains in AP participation and exam scores across an increasingly diverse AP population, Moreno Valley educators and administrators helped many more students save time and money in college.”

“We put the resources behind our students to ensure we are living up to our mission to graduate college and career ready students,” said Superintendent Dr. Martinrex Kedziora. “Being named AP District of the Year is a validation that the resources we have put in place to support all students to be successful are producing results.”

In addition to celebratory events at the district level, all three winning districts will be honored in Orlando, FL during the 2019 AP Annual Conference in July.